Learn How to Invest in Gold & Metals to Protect Your Wealth
Or Call Us Today
Due to strong investor demand, we are receiving an unusually high volume of online requests.
For faster service and expedited delivery, please call our toll free number.
Call Us Today 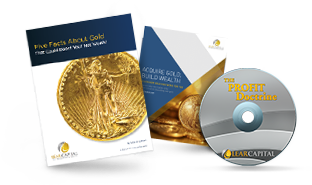 When the world’s largest hedge fund makes an enormous investment in gold, it’s time to take notice. Why gold and why now? For one, owning gold has long been regarded as a way to protect wealth in uncertain times, and just look around. Global tensions mount daily, the value of a dollar is volatile, and renewed concerns about a trade war have markets rattled.

While gold has proven itself as a reliable asset for decades, even centuries, misconceptions still remain. Here, we’ll address the most common of those to ensure that your financial decisions are based only on the facts.

Misconception #7 - “Gold has a poor return”

Critics argue that gold doesn’t pay dividends and point out that you won’t get rich from buying gold, but this argument misses the point. Buying gold isn’t a get-rich-quick scheme, but a vehicle for wealth preservation. That said, let’s look at historical performance. Since 2002, gold has increased in value roughly 300%, a period during which the Dow increased by less than 200%. Stocks and bonds have a comparative edge over a 30 year period, but gold still increased more than 170% over that time. And since gold ownership became legal in 1975, the yellow metal has increased more than 500%! Gold may be better suited for wealth preservation than wealth generation, but would you consider those poor returns?

As we discussed, the primary purpose of gold ownership is to protect your money, not to try and “time” its purchase with the expectation of a huge return. Buying gold isn’t like betting on the next Google stock. Instead, it’s a time-tested way to preserve your money’s value, diversify your holdings, and help safeguard your savings.

Storing gold is no different than storing anything else of value - you want to strike a balance between accessibility and safety. Some of the most straightforward options are to keep your gold in a fire-proof safe at home, or rent a safety deposit box at a bank. For those concerned about space, consider that even tens of thousands of dollars in gold can fit in the palm of your hand.

Let’s talk about these two together, because they’re opposites and yet both are commonly held misconceptions. Is there too much gold, or not enough gold? Neither tells the full story.

First of all, gold is scarce, very scarce, and recent trends suggest that isn’t changing anytime soon. In November 2017, Fortune reported on a revelation made by Pierre Lassonde, co-founder and chairman of mining royalty company Franco-Nevada. Lassonde told a German newspaper he was unsure how the world would be able to keep up the pace of discovery of gold deposits, and warned that a gold supply-demand imbalance could lead to a worldwide price increase. Also in 2017, China, the world’s largest gold producer, suffered a record drop in gold production, while output plateaued elsewhere.

On the other hand, some argue that there isn’t enough gold in the world for it to be used as a viable alternative to government-backed currency, limiting its utility. However, among experts, there are highly vocal detractors of this theory. One of the most influential is N.Y. Times Bestselling Author Jim Rickards. For his piece in Business Insider, titled “Gold Is The Only Option For When Paper Currencies Die,” Rickards calls that argument “complete nonsense,” and defends that the scarcity issue is addressed simply by pricing gold at a figure which reflects that scarcity (a figure which Rickards argues is $10,000/oz).

Misconception #2 - “There’s nothing more reliable than the U.S. dollar”

If only this were true, but let’s look at the facts.

According to the ICE index, which measures the dollar against a basket of six other currencies, in 2017 the dollar’s value fell 10%. That was its worst year in more than a decade, and—despite a partial recovery in recent months—plenty of economists are still skeptical. According to Quartz, “UBS and Lombard Odier expect the euro to keep gaining against the dollar, while strategists at French Bank Société Générale see the dollar falling another 10%.”

The other challenge that the dollar faces is the rising cost of living. According to USA Today, the price of food and groceries is outpacing the inflation rate. Ground beef, for instance, costs 52% more while prescription drugs cost 43% more than 10 years ago. With the prices of necessities skyrocketing, the dollar’s loss of purchasing power can pose serious financial strain.

Misconception #1 - “All this talk of volatility is an overreaction”

It’s easy to get lulled into a false sense of security: Despite tremendous unrest, recent geopolitical tensions haven’t boiled over. No bull market lasts forever, but the current one has already exceeded a record-breaking 3,459 days. And banks have, so far, fared ok against cyber attacks, even as those same banks quietly plan for a “Doomsday” scenario, as reported by the Wall Street Journal (paywall). But what if even one of those scenarios takes a turn for the worse? Consider how gold might fare then. As a physical asset, not a digital one, it can’t be erased by a keystroke. As an internationally recognized asset, its value isn’t tied to the fate of any one government. So ask yourself: would you rather be a wishful-thinker, or be prepared?

Don’t miss an opportunity because of misinformation. Take control of your future finances by learning the facts and considering what role gold should play in your portfolio. For more information and valuable insights, you can also request our Free Investor Kit. .

How Lear Capital Can Help.

Our complimentary guide to investing in gold and other precious metals gives you the information you need to get started. This includes:

Complete the form to request your free guide, or call us today. Specialists are standing by to process your request.